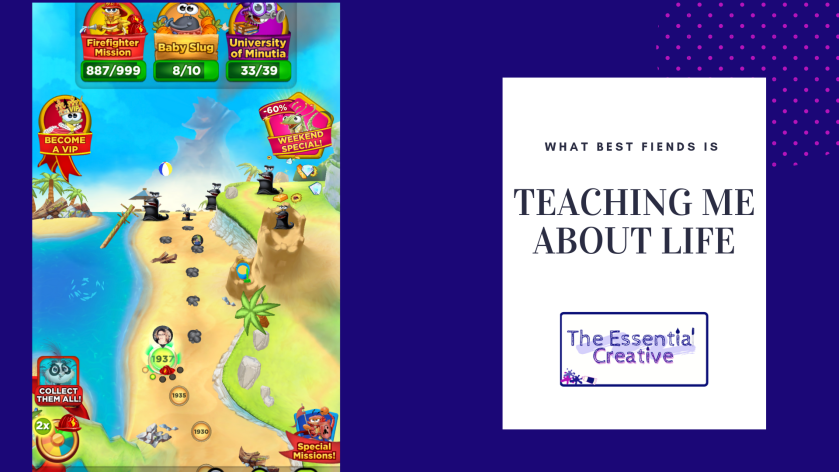 I’ve been playing Best Fiends for about a year now – maybe a little longer. It’s something I pull up on my phone while trying to fall asleep or when waiting at a doctor’s office or while at cheer practice. As I’ve been playing, I’ve learned some things that can translate into life rather easily. Let’s have some fun with today’s post.

1. Sometimes, your second-string team is the best team to use.

Some of the levels are hard to win so I have to pull in my second-string team. This team includes some of my weaker players who aren’t leveled up as much as others or don’t score as much, but their powers allow me to do more. For example, in the above example the second character from the left, BAM, allows me to blow up everything on the screen. That is helpful for massive points. This character – combined with the help from the middle character, Lacy, who adds extra points to certain colors which make it so I can hit goals for clearing out a specific number pieces – led to me winning this level.

2. One strong player is all a team needs to succeed.

In the above level, I was struggling to win so I chose one strong player (Karma) and then used the weaker players on my teams who had better power-ups. While Karma could score more, the others’ powers helped me more powerfully so, in the end, I was able to complete the goal. This is especially helpful in the game when you don’t have to kill slugs. This makes me think of how sometimes in life it’s now about how far I get or how much power I have so much as it’s about how I use all my resources together and ensure I am using my best combination of strengths to accomplish the goal.

In the above, Ru and Bam helped me win because though they score less per piece their overall impact is greater. In life, we need to look for the strengths that our weaker friends and teammates have so we can succeed. There are gems hiding in every circle of friends, waiting for a chance to sparkle. This is similar to the above lesson except in this one I didn’t need the stronger players so much as I needed the power of the weaker players. When you don’t see a strength within you for a certain task, look at the power within your weaknesses to help you overcome.

4. One weak player will not destroy a strong team. 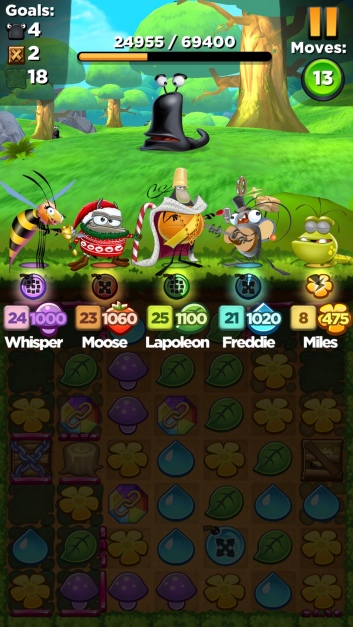 In the above example, Miles was able to give me full life in the higher-scoring pieces, which led to me winning the match. Sometimes in life, we need to partner with people whose skills don’t match ours or aren’t as good as ours so we can gain from where they are strong. Miles does in one piece what the others take 20 – 30 pieces to do. Some of your friends and colleagues have their own superpowers like this one. They won’t hurt your team, they will help it!

For those out there looking for jobs, think of this when looking at job ads. If you are only 80% qualified but you are strong in that 80%, go for it. Your strong 80% may beat out someone who is only semi-strong in 100%. Own your strengths and how they can help you in the areas where you aren’t qualified and then use that weakness to help you overcome by learning as much as you can.

Sometimes I will play a level multiple times with various teams before I conquer it. In this level, I am still figuring out what to do. As I have learned in the past from the game, there are times when I have to study the board and pay attention to my moves in order to win. Planning ahead and taking time to look at how my moves affect one another is my only way to succeed. In life, I find this is true at times as well. While there are times I have to “step out of the boat”, there are just as many times where I have to plan my moves wisely.

Do you play Best Fiends? Have you had days where you’ve played and it’s made you think about life in some way? If so, share below. I’d love to hear if there are others that get “too deep” when playing games!