We were given a HUGE zucchini by a friend. When I say huge, I mean… well, in the pic below my daughter was already 3/4 if the way through grating it when I realized we forgot to take a picture of the actual zucchini. It was like a giant version of zucchini from a friend’s garden!

When given such a large zucchini there is really only one true option for a non-gluten-free, non-keto-following family: Zucchini Bread!!

So we started grating our zucchini and getting the ingredients together.

This is what we got in shredded zucchini, which you can actually make quite a few

recipes with, from our giant squash! That’s a large bowl that would hold popcorn for an entire family or pizza dough for two, for reference! Later this week we are going to use the remaining shreds to make Zucchini Slaw and see how we like it.

The recipe we used is a modification of this one from the food network. We used less salt and used sea-salt instead of regular table salt; and added many more walnuts, as well as some strawberry slices in one of the breads and some mint in another. No to the mint version! Ugh!! And the strawberry zucchini bread was rather interesting. Not sure I love it but it was worth trying!

We mixed all the dry ingredients and the eggs – and by we, I really mean my daughter and mother while I took pictures for this post. However, I HAD shredded the remaining 1/3 of the squash that belonged to Goliath and his friends!

Once all was mixed, we loaded up the various sizes of bread pans we could find (after all this isn’t a foodie blog so it’s not like I was prepared to take photos of us doing this until I realized there is a lot of fun in this activity that could be shared here), and we set them in the oven. 45 minutes later…. oh how delicious the house smelled and we had these beauties:

We let them cool down before grabbing the pictured loaf (my daughter’s pick) and slicing it for serving. Then, we served them and enjoyed the afternoon! 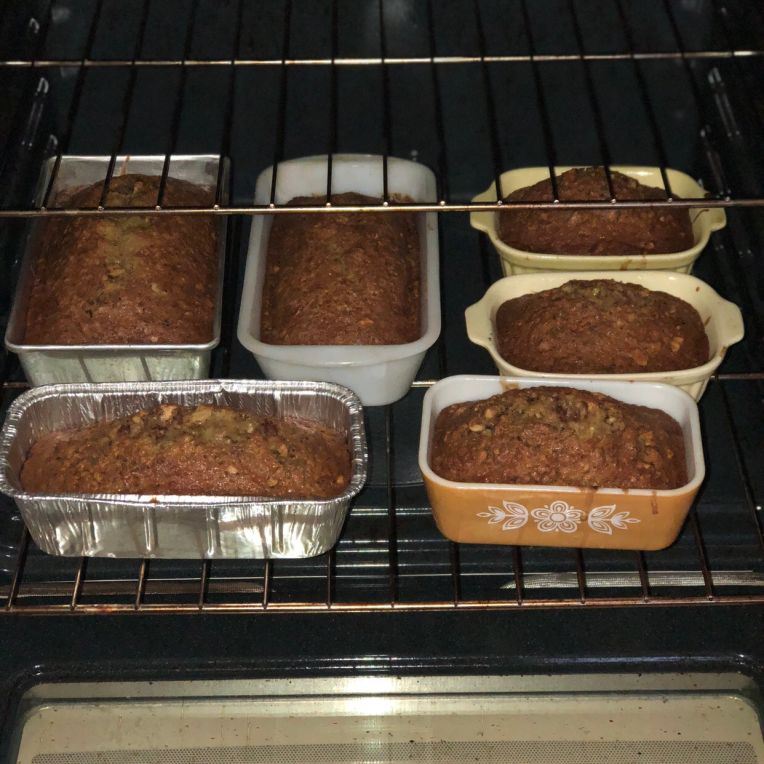 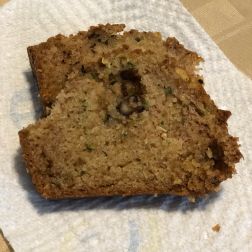 Beside the memories we made today as three generations of us ladies baked a recipe given to us by a fourth generation (my Nana), we shared one that involved my Nana, my mother, and I.

When I was a child, I loved banana bread but I would not think to eat something as terribly disgusting as zucchini bread!! So one summer when I was staying with my Nana for a week, my mother and she devised an evil plan that has forever changed my life! No – I’m be serious. Hear me out!

While I was swimming, my Nana made zucchini bread. And a lot of it. When I came in, she said there was – you guessed it! – banana bread for me to eat. Oh eat I did. Many pieces.

Later that evening Nana asked if I’d like to try the zucchini bread she baked that afternoon. Not being the brightest crayon in the box, I said “no way” and asked for more of the banana bread she’d made instead. At that point a light should have gone off but since my color was a bit dull, I didn’t understand why she and my Pa were looking at me.

She proceeded to tell me about how she’d made only one type of bread that afternoon and it was not banana flavored at all. I was shocked and couldn’t believe what I was hearing. I’m sure there was some crying and pouting and maybe some being sent to bed early for my reaction but my memory is a bit fuzzy. What I do remember is trying a piece of the so-called zucchini bread the next day and expecting it to be awful and instead finding out how delicious it was!

Later in life, my uncle Dennis would trick me into eating Venison by doing a similar foolery and telling me it was a hamburger. It seems I am not super open about trying foods I know I won’t like so people have to trick me into trying new tastes.

What memories do you have of baking with family or being tricked into eating a food that was something other than you suspected?

Looking for a specific word?

Welcome to The Essential Creative, where we excel creatively in faith, family, community, and business. Take a look through the menu or search for a specific word. I'm honored you're here and look forward to getting to know you. ~Shell