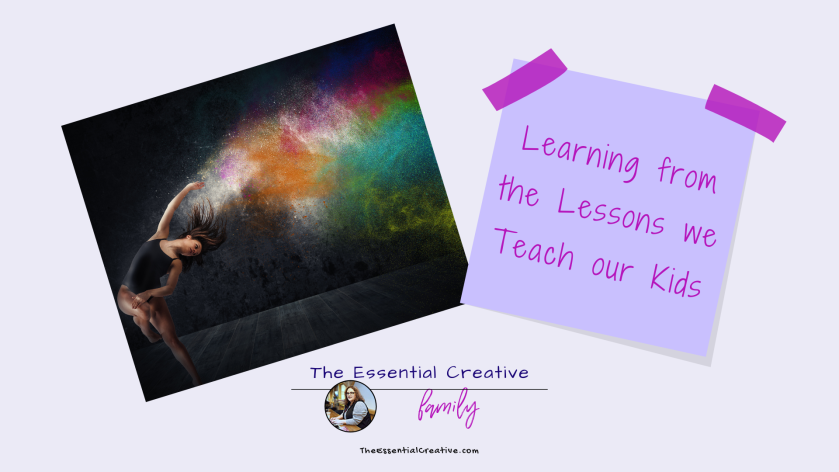 My daughter recently took a dance workshop that turned out to be a life lesson for me. Parents were asked to drop their kids off from 1 – 4 and then return for a dance showcase. When I arrived, this was part of the showcase I saw.

Note: the videos may appear to you as being sideways, but please click the arrow and they will correct themselves to the proper portrait view while playing.

You may be able to guess which one is my daughter when I tell you she has never taken a dance workshop and has never done this style of dance. However, she wanted to take the workshop and learn from seasoned professionals. In the second video, she is dancing with individuals who have performed at World of Dance Boston and she was struggling to keep step but was so elated to join them. She was in high heaven just being able to learn and dance with them that she admitted to being a bit overwhelmed. I thought about how to an outsider, she may have seemed way outside of her league and they wouldn’t have been wrong.

I arrived and saw her trying her best, sticking with it despite not having the moves down, and giving it everything she had. As tears streamed down my face suddenly, I thought of how I’ve always told her she can do anything she wants by trying it out, practicing, and learning from the best. She really gets it. She was so happy and talked about all she learned for the rest of the evening. This got me thinking about the times I haven’t done what I’ve told her to do.

Practicing What we Preach

I thought of how as adults we tend to tell our kids things without putting them fully into practice and how as creatives we tend to want perfection before sharing our work. I thought of how we always want everything to be great before we put it out there, and there IS a time for that. But how many of us have stalled on project launches or publishing books because we wanted to wait until the time was perfect? How many of us stopped pursing learning because it was too hard? I can admit that I never would have taken the workshop because I would have been scared of looking like a fool. If I even attempted to do this, people would have been grabbing epi pens and running over to me poking me because I’d have looked like I was having a seizure. BUT the same day I watched this, I supported a friend in her goal of winning a writer’s retreat so I became encouraged to go after some of my writing and career goals with more zeal after this lesson from my daughter. It’s time we practice what we preach to our kids.

There are so many ideas I have written down in my journal (97 in case you’re curious) that I wrote down and left behind. I either thought they weren’t good ideas or thought it wasn’t the right time because I wasn’t prepared. Or I simply became lazy and didn’t do anything with them. Ideas that could go to the grave with me if I don’t start moving on them. The night I came home from the workshop I ensured I went through that list and started putting dates for action next to each idea. I was really challenged by daughter to go for it with the goals and dreams I have, just as she is doing with my encouragement.

As many of embark on Christmas Eve tonight, let’s give ourselves the gift of a promise to start making progress in 2020. A promise to start producing and launching those things we have been waiting on. It’s time to be okay with Version 1 and improve as we go. If we never start, we won’t get better.

What have you not gone after that you should have pursued? It’s not too late to start.

Looking for a specific word?